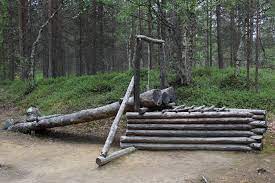 Almadraba is a word of Arabic-Andalusian origin that comes to mean “place where you hit or fight .

But with this word we have that a fishing technique used to hunt large specimens of tuna is also designated. It is carried out in countries like Spain, Morocco, Portugal and Italy .

This consists of guiding the specimens through a maze of funnel-nets near the coast , strategically placed to take advantage of their passage during their migratory process. We also call the facility that is intended for it, having different types.

The reason for their idea, implementation and maintenance is the good disposition of specimens of this species on the coasts of these territories during the migration, as well as the good climatic conditions and terrain characteristics . Of course, it must be said that, despite being an effective technique, it is currently carried out by tradition, being deeply rooted in many of the countries mentioned, especially in Andalusia .

This artisanal capture fishing technique originated a millennium before our era, making it one of the longest-lived. This origin is attributed to the Phoenicians , who already at that time were taking the bluefin tuna in Cádiz with this resource.

After them, the Romans continued to take advantage of the technique both in our country and in other imperial lands. In its beginnings, from what can be extracted from the documentation found, those used were sight or draft type traps.

Almost all those that have penetrated the Mediterranean Sea from the 18th to the 20th century have been captained by Spaniards, specifically from Benidorm, in Alicante, where they are considered to be the best.

The activity of the almadraba stands out from the 12th century on, when the Duke of Medina Sidonia was given the royal honor of managing these networks both in the Mediterranean and in the southern Atlantic Ocean. For six centuries its exploitation was splendid, carried out by the house itself. It was in the 19th century that these became managed by a corporation, establishing the Almadrabero National Consortium .

How is the almadraba technique performed? The art of tuna fishing

This technique is really simple. The most basic version we found consists of a shallow funnel-shaped cove given between two boats that is held by a longline . Here the fish are collected and expert fishermen glide through these nets to make a selection of the pieces of interest, returning the rest to the sea in perfect condition.

It is here where the pieces are harpooned and bled before being loaded on board by several men. This activity is carried out in a specific way, selecting particular places and moments. The labyrinths, whether simple or complex , are located near the coasts, in waters that bathe Spain, Italy, Morocco and Portugal, where the tuna, which is the target of the fishermen, swims in their migratory process.

As for the moment, it is in the months of April and May , sometimes extending to June, when it will be successful because it is when this species comes from the north to enter to reproduce in the Mediterranean. At this time, in addition, the pieces are shiny, as they have dedicated their time to feeding very adequately.

The catch is also made in the months of September and October , when the tuna go back to the Atlantic. In this case, the meat is not eaten fresh (the specimen is already less shiny) but is used to make preserves. This practice is associated with snoring , which is the cutting of the tunas that occurs after their capture by trap.

Discovering the Lures of Roshi Fishing